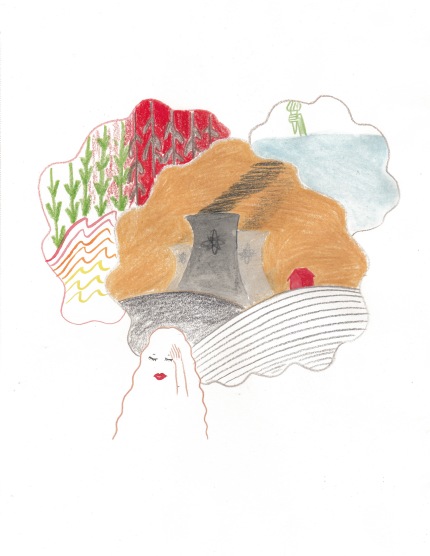 Adam, in a horrid state, rouses himself up and searches about, no one to be seen. He stumbles up from the patch of leaves he is laying on. Adam wanders, nude, distraught, seeking. He catches a glimpse of Eve in the distance, stretched out in the shaded grass next to a pond, equally nude. He joins with her. As Adam approaches, Eve looks up at him, and observes his discomfited nature. Before she can formulate a word, he attempts to untangle his disjointed thoughts.

Eve, incapable of grasping Adam’s swollen and despairing countenance, nor of embodying his inner turmoil, barely glances at him before returning to her peaceful rest.

Adam, desperate to impress upon Eve the horrific images he has just perceived, proceeds with much effort to render in words his tumultuous tale. “You could not believe what I have just beheld; a dreadful event is poised to burst after us. Such horror, such hopelessness, beyond apprehension.” He lets himself fall next to her, in abject wretchedness.

Eve turns back to him, astounded. “What? Horror, here?”

“No, it was not within this space that I saw it.”

Eve, lost in thought, ponders his words for a moment, then focuses back on Adam, curious. “But we have never been anywhere else.”

Adam fixes his gaze to the crystalline reflections of the star’s rays upon the pond as he endeavours to understand this event. “I was here, then I slumbered, then I was there, and then I was here again.”

Eve raises to her side and leans on Adam’s knee, as the mystery of his experience captures more of her faculties. “Adam, are you implying that he brought you to another place?”

“I am not certain where I was, but it was not here that I conjured these things, this I know.”

“The most horrible things: Agony, decay, pollution, craving, sordid creations. So many people living in fear, living in torment of the worst sort.”

Eve caresses Adam’s flowing hair, attempting to assuage his ill feelings. “I still do not understand. What horrible place do you speak of?”

“It was called Earth, and its history was conferred to my existence in an unending succession of ghastly images. Part of me was there. Part of me endured all of it with them, through them.” He pauses, sorely recollecting those sensations. “A whole world. Inhabitants born, living short suffered lives. Inhabitants who then died of disease, lost hope, regret, hunger. Even murder!”

“Yes, murder, and so much worse still.”

Adam looks at Eve earnestly, trying to gauge her level of discernment, of how far he should delve into the reality of what he has seen without compromising her innocence, her amity.

“Things worse than murder? How could such a place even exist?”

She resumes caressing his hair. Adam further contemplates Eve’s well-being and chooses to discontinue the elaborations of his descriptions.

“I have perceived things that I ought not repeat to you. I have seen what it is that some of these people have done to one another.” He temporarily interrupts his discourse, the painful images coming back to him in the moment. “It is so hideous that it induces a magnitude of displeasure to my being. Billions of people, struggling, over and over again. Life and death. No respite, no end.”

“My dear Adam, even though I am familiar with all these words you speak of, I am at a loss to comprehend the consequence of them, or to sympathize in any way.” As Eve speaks to Adam, she gently slides her hand over his arm in  tender affection.

“Be grateful of that,” Adam replies. “For I have felt their anguish, and I would spare you of it at any expenditure.”

“Was it all so evil? Was there not any redeeming attributes to this place you have sojourned to?”

“Some, but all far eclipsed by the governing perversity to which the beauty could be measured in drops, but the suffering, in oceans.” Adam shakes his head in a dejected manner.

“How can he have brought you there, and why?”

He contemplates Eve’s query, and a faint impression springs forth to him. “It was for a purpose, and,” Adam, arrested in mid-account, his eyes fixed to the ground, becomes exceedingly faint. “Oh, I saw how this place came to be.”

A flash of horror thunders through his mind, and a subsequent expression of great heartache ripples across his facial features, distorting them to an almost unrecognizable form. Eve recoils in fright.

“It, it was because of us. We were responsible.”

Of a sudden, Adam obediently bows his head and shamefully shadows his appearance nether the veil of his consentient palms.

On hearing of Adam’s self-recriminations, of them being at the origin of this harrowing other-worldly disturbance, Eve overcomes her momentary displeasure to Adam’s harsh judgment. She becomes defensive and asks: “How could we be responsible for such a place?”

Adam is despondent and Eve pulls at his hands. At his grief-stricken expression, she grows concerned. “Adam, speak to me!”

Adam takes a few moments to constitute himself, and hesitantly proceeds with the account. “It was that which you were attempting to prevail over me. Us. Our parts, joining together.”

Eve wrenches herself away from Adam in consternation. “How can that have anything to do with this place you called Earth, where you witnessed countless people suffering so dreadfully?”

“I do not know, but he admonished us not to do certain things. He said that there would be grave repercussions.”

Eve cannot come to terms with this inference, this connection that Adam is implying, particularly not through any fault or influence of her own. “But how can there be such grave repercussions for anything we do here? This place is so idyllic?”

“Again, I do not know. But his essence left me somehow within that moment. I experienced darkness, loss of harmony, and we became them,  all of it was created from us.” Adam trembles as he unsuccessfully attempts to dislodge those impressions from his knowing. “Please do not try to persuade me again, do not even refer to it any longer!”

Having difficulty facing Eve and her insistence in the matter despite an admonition of this horrifying outcome, Adam turns aside in dismay.

Eve still contests Adam’s resolve. “But, Adam, I yearn for it in a way I cannot explain.”

Delicately resting her head on his shoulder, Eve proffers an embrace.

“Eve, I beg you. After what I have been through, I would as soon tear it off and burn it to ashes before I would even attempt such a thing with it, the consequences are far too important, just because of this, union, you yearn for.”

“Adam, do not be so hurried to settle your judgment. Please, consider my feelings further.” Through the sensations they are communing by their corporeal link, Eve feels Adam draw back. She reasserts her longing by keeping to him in a more coercive clench.

“No Eve, my word is final. There is nothing additional that you can do or say to convince me otherwise. I am going to Father now, to impart to him what I have witnessed. I will make him aware that he can rest assured, never will I be betrayed to go against him.”

Forcefully parting with Eve, Adam stands. “He will be disappointed of hearing about this deception that we have considered, our contemplation of going against his word. But he is forgiving and will be reassured of my renewed convictions and obeisance.”

Adam distances himself, as Eve, disheartened, sulks into the ground.

MICHAEL VINCENT MOORE is a social science writer and lifelong meditator, with extensive studies on human behaviour and dream research with over 30,000 reviewed dreams, and an active dream journal spanning over two decades. Fascinated by the potential of dreams and consciousness and their connection with our ultimate reality, he has devoted much of his time attempting to unravel the mysteries they contain through himself and others. Much of his insights and findings are translated into both his fiction and non-fiction writing. He is also the founder of TheOneHumanProject.com, a global initiative with a mission to scientifically prove that we are all connected.

iThere are no comments

Begin typing your search above and press return to search. Press Esc to cancel.