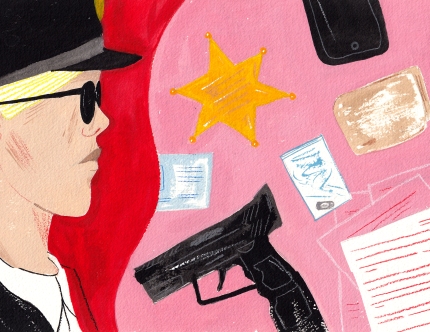 By the time Mariel arrives at the water’s edge, the sun’s hanging low. The sky is slowly darkening like a bruise. Dry leaves scuttle around her leather boots and get caught like weeds in the cracked black pavement. She grips the railing with both hands and spits into the canal, hoping to hawk up the nauseating taste of tobacco sitting on her tongue. No luck. She swallows hard. On the opposite shore, the rusted husk of the abandoned malting factory towers above trees—its graffitied silos mountainous and grey, and beyond them the redbrick sprawl of St-Henri. Mariel looks around, her trained eyes scouring the scene. A woman and her son toss bread to the pigeons. A handful of cyclists weave down the bike path, fewer now that the light is fading. She slips two fingers into her back pocket for the stale pack of Du Mauriers, her first pack in months. She lights up with her brand-new Bic. It’s neon yellow, the only colour they had at the dep, and the sick brightness of it only makes her feel queasier.

Arnaud turns up on foot after her third cigarette. Mariel tilts her head, blows smoke rings into the wind.

Arnaud is nearly a foot taller than Mariel. Broad frame outlined against purple clouds. He’s in plain clothes, like her. Pouched bloodhound face shadowed in the half-light. Mariel notes his pink eyes and the pungent smell of weed. He’s been her partner on the force for nearly five years. He knows her better than anyone else. With a look he sees the fear coiled inside her like a spring. Tight and metallic, ready to pop. As she grinds the end of her cigarette under a boot heel, he’s already rolling her a joint.

Mariel takes it gratefully. She tips her head back and inhales slow, letting the weed linger in her throat. She immediately feels better. Calmer. The small muscles around her neck and shoulders go slack.

Arnaud leans his elbows against the railing and peers into the water. A few months ago, a local folk musician drowned near this spot. Accident or suicide, no one knows for sure. Mariel and Arnaud were two of the cops who trawled the canal and parts of the St. Lawrence, dredging up scrap metal and plastic bottles until her bloated body finally surfaced. Dozens of missing person flyers are still stapled to telephone poles and pasted to the crumbling walls of metro tunnels. Mariel remembers the girl from her neighbourhood bar, a tall brunette with a ridiculous bird’s name. She played the accordion and the fiddle, sometimes the guitar. Katherine Kingfisher? Or was it Magpie, or Loon?

The anger in Arnaud’s voice is quiet and razor-thin.

“I didn’t ask to be rescued,” she retorts.

“Fuck you. I could’ve done this alone.”

Arnaud shakes his head and says nothing. He knows when she’s bluffing. Mariel scowls and kicks a loose pebble, sends it skittering over the edge. Streetlights across the canal flicker to life.

Arnaud places a callused hand on her shoulder. She feels him shifting gears, speaking her language, manoeuvring her with his Good-Cop voice. His accent barely perceptible after years of night school English. Inside, she bristles.

“Now you’re being an idiot.”

“You have a choice.”

Below them the water is flat indigo. Mariel thinks of the drowned folk singer, her long brown hair knotted around her neck. When the divers dragged the body from the riverbed, there wasn’t much left of her delicate bird face. Mariel heard the family had to look for childhood scars, for the distinct cluster of moles between her breasts. The image depresses her. A body soft as cotton, pulled apart by water and air. Even mollusks have shells. She imagines herself naked and wrapped in algae, fish and bottom feeders chewing on her eyelids. Mouths tenderly peeling away her skin.

“This isn’t going to disappear.”

Arnaud’s playing Bad-Cop now. Blunt and unflinching. Mariel wishes he hadn’t mentioned the kid. She’s spent the past twenty-four hours working on forgetting. A neighbourhood dealer, one she recognized from night patrols near the park,around eighteen years old. He smirked when she pulled him over and flashed her badge. He looked her up and down and said: salut baby, you can pat me down any day—but that wasn’t what set her off. Maybe it was his peach-fuzz moustache, or the oversized T-shirt tucked messily into his belt—a band shirt that had clearly been worn to death, the printed white letters beginning to crinkle and peel away—Godsp ed Y u! Bla k Emper r!—like some half-finished game of Hangman. The kid showed her his teeth in a too-wide smile, stepped out of the car with one hand in his pocket.

She remembers how quickly she unclipped her sidearm when the kid moved towards her. The smooth arc of the Glock 17 as it travelled up from her holster. Her aim was perfect. Was she the one who pulled the trigger? Or was it someone else, a doppelganger Mariel, some angry and hateful version of herself that she felt—still feels—swimming below the surface? She left him there like roadkill—took his phone and wallet, tried to make it look like a carjacking gone wrong.

“Shut up,” Mariel snaps, even though Arnaud has fallen silent. “Enough stalling.”

She tosses the butt of her joint and gestures to her partner. She’s pleased to see that her hand isn’t shaking anymore. Not even a tremble.

She can tell he doesn’t want to. He narrows his eyes, shuffles his feet like he’s about to walk away. Finally he reaches inside his jacket and pulls out a plastic evidence bag. Inside is the bullet. Swiped from the coroner’s office. She drops it in her palm, rolls it between her thumb and index finger. Examines the unique markings left by her gun barrel, the lines and grooves as damning as fingerprints. But in the growing dusk, the bullet could be anything: A pebble or a bottle cap. The core of an apple. A quarter thrown in the canal for luck.

Mariel has never been much of a pitcher, but somehow she manages to hurl the bullet far, far out into the murk of the canal. It vanishes into the dark. She doesn’t hear it hit the water. Only a few silver ripples disturb the placid current. She exhales with a feeling that isn’t quite relief. She’s floating in place, strangely untethered, as though the bullet itself had been keeping her on the ground.

Arnaud shakes his head, his bloodhound face even sadder than usual.

Gone. Mariel crawls inside the word, lets it cover her like a protective shell. Eventually the bullet will be carried downstream, spewed into the gaping mouth of the river, or washed ashore, nestled between slick rocks, refuse, and weeds. But even if someone finds it, plucks the anonymous piece of lead from the mud, what story can it tell? Mariel clutches the railing, swayed by a gust of wind. Une balle perdue, une balle errante.Now the bullet is simply stray. Like a wandering dog or a strand of hair. Something innocent and without intent.

MEGAN CALLAHAN is a fiction writer, book reviewer, and translator from Montreal. Her work has appeared in publications such as PRISM, Matrix, Vallum Magazine, and Québec Reads. When she isn’t writing, she likes to make music, bake bread with her partner, and people-watch from her balcony garden.

iThere are no comments

Begin typing your search above and press return to search. Press Esc to cancel.